The Lamu Conservation Trust joined the Lamu Cultural Festival in its 13th year of celebrations during a myriad of festivities spanning a long weekend over the 21st to the 24th November 2013. 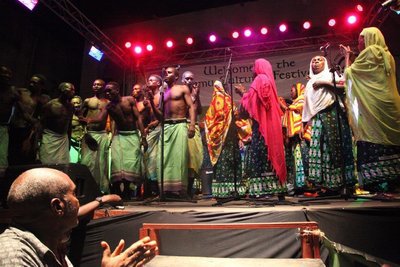 This annual festival held in Lamu Old Town is dedicated to celebrating the local traditions of this beautiful archipelago, whilst being timed each year to coincide with the high tides which create ideal conditions for Lamu’s famous dhow races. This festival also presents the rare opportunity for local and international visitors alike to witness traditional dances, fast-paced donkey races, canoe and swimming competitions whilst also showcasing the traditional skills and crafts of the Swahili people. 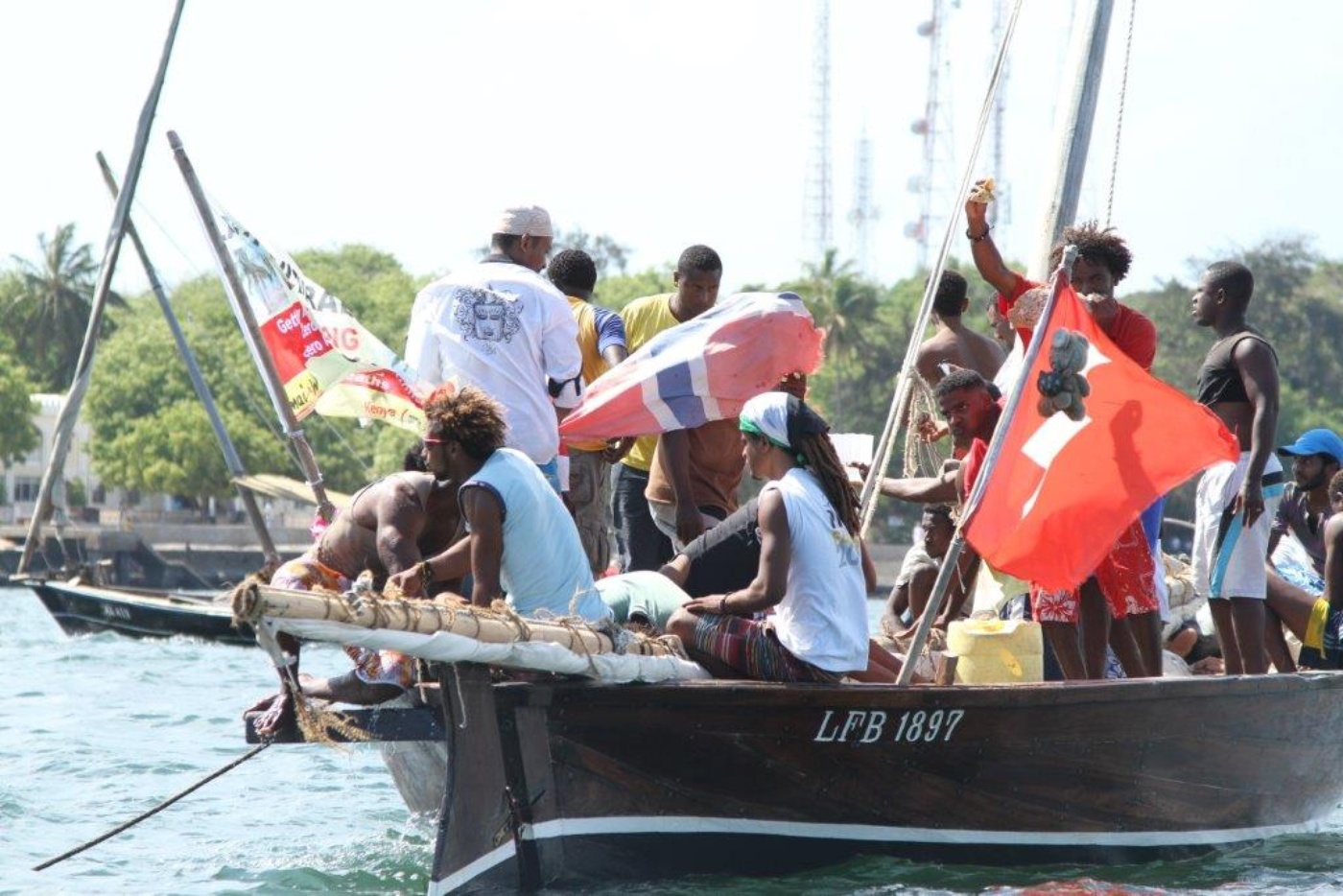 The Lamu Conservation Trust, as a new sponsor of the Festival, was thrilled to have the opportunity to get fully involved in all of the activities taking place during this vibrant weekend. The LCT had a central stall along the seafront at the Lamu jetty where the team were available throughout the Festival to talk to the residents of Lamu as well as international visitors about the work of the LCTand what projects are taking place through our Wildlife, Culture and Marine programs, especially activities going ahead on Amu Ranch. 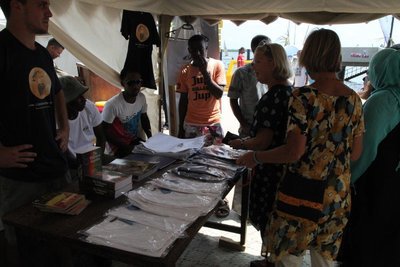 To encourage the next generation of Lamu to take an interest in the work of the LCT and learn more about their remarkable environment and wildlife a Wildlife Drawing Competition was also held during the festival where children could sit at the LCT stall and draw their favourite marine and terrestrial animals. Prizes for the best drawings, including T-shirts, bags and stickers were then given out to the handpicked winners. The LCT, working in partnership with the David Sheldrick Wildlife Trust, also organised a film show over the weekend, allowing anyone to watch the DSWT’s short film documenting 24 hours in the life of the DSWT for free. 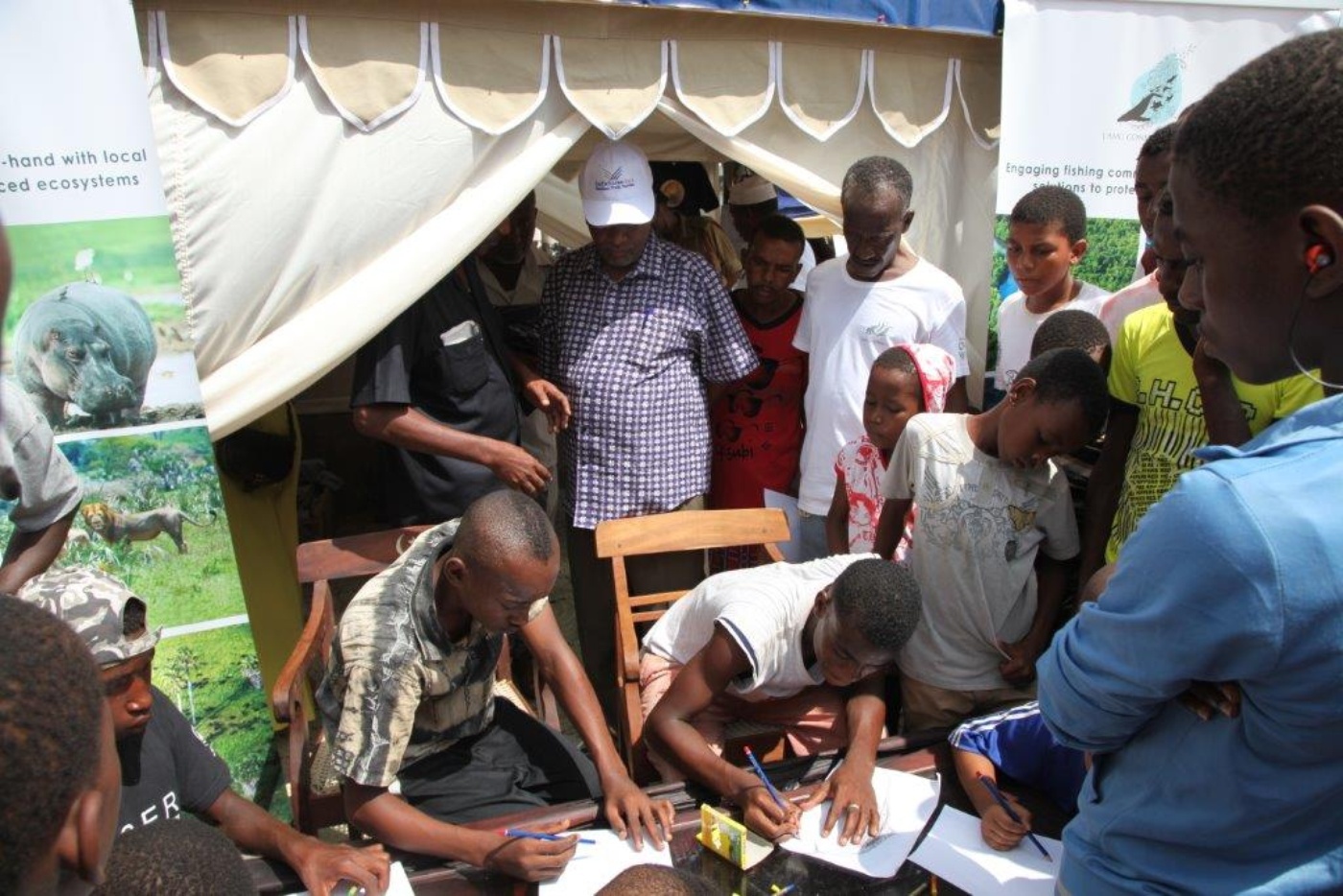 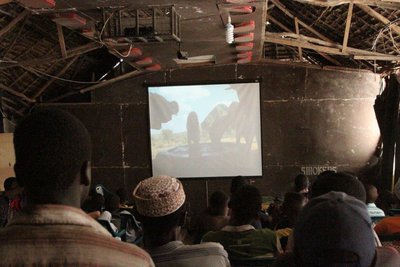 The first dhow race to take place during the festival was the Jahazi and Kasa competition. The Jahazi being the larger dhow followed by the smaller Kasa. These races commenced between Shela and Lamu town with a large floating audience in tow supporting their favourite dhow. In this race the LCT supported the dhow called ‘Eco’, sponsoring their sail which was painted beautifully by a local artisan with the LCT’s Wildlife logo. 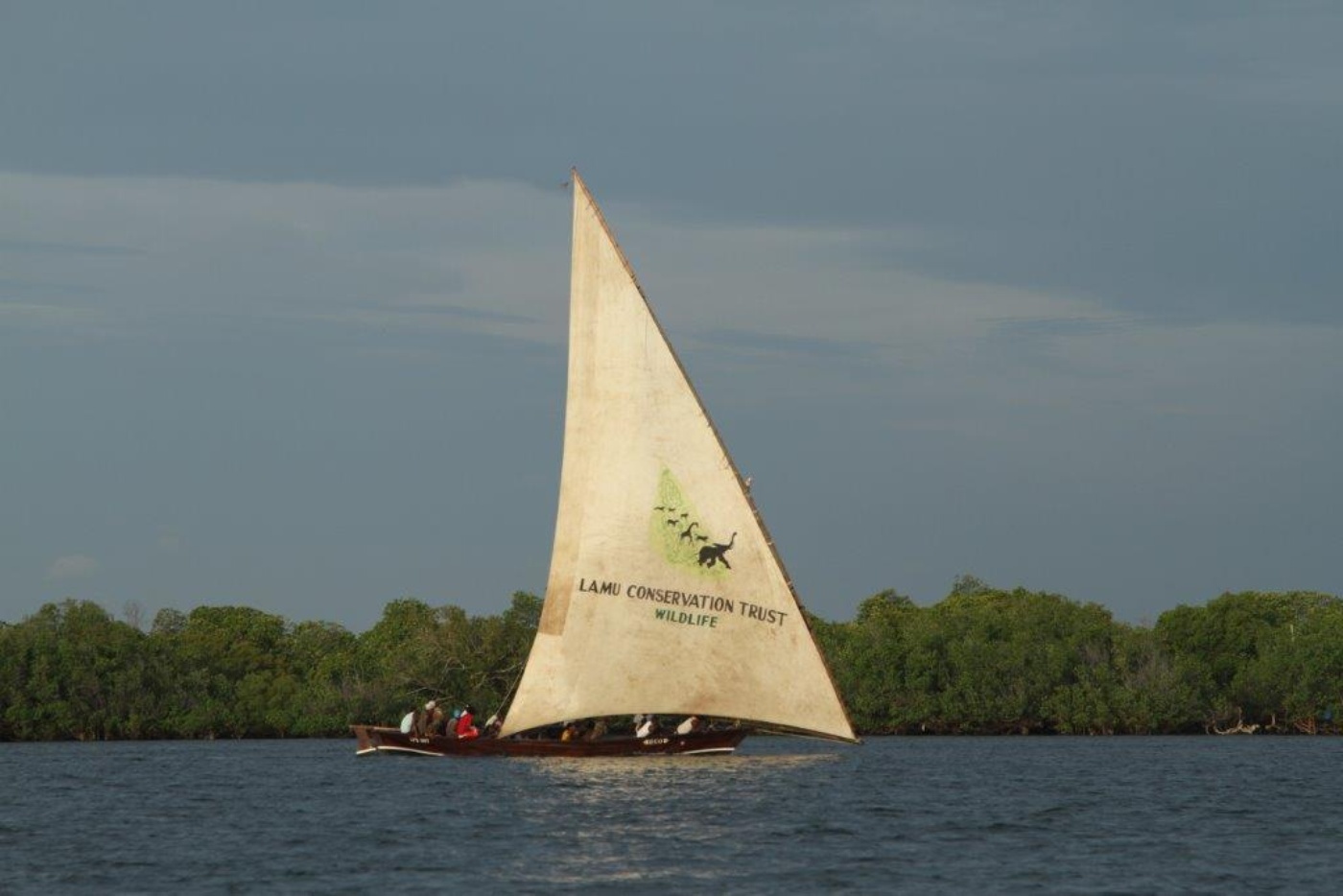 During this eventful three hour race Eco began in the lead, tacking efficiently to change the direction of this large dhow in order to catch the wind and follow the set route, yet on a couple of occasions Eco was stealthily overtaken by a competing team before in the last half an hour Eco put everything they had into the race and managed to catch good wind before making a brilliant tack which put them in the lead and eventually won them the race. 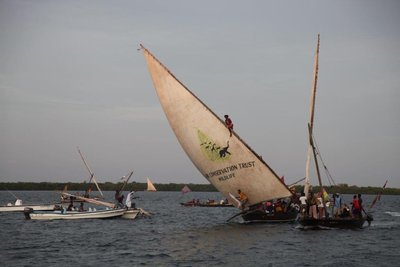 The following evening traditional dances along the seafront welcomed the starlit sky over this bustling old town, where every resident of Lamu was out in the streets joining in the spirit of the festival. The LCT had a special performance for the crowds during this evening having invited sixty-five of the Sanye tribe to Lamu to perform their ancient spiritual dances.

The Sanye tribe are the most marginalised tribe in Kenya, one of the last remaining bush-men tribes still surviving as their ancestors did in the coastal Forests of Lamu. With only 500 of the tribe left in the world the LCT is striving to protect their natural way of life and their culture. Travelling from the remote area of Mkunumbi, which as the eagle flies is only 50kms from Lamu Old Town, these Sanye dancers had never before set foot on Lamu Island or experienced town life. The only performance to be invited on stage at Lamu Fort, the Sanye gave a wonderful recital of their spiritual dance, watched by hundreds of people in this huge open air auditorium. The celebrations that night carried on long into the morning, with more dances from the Boni, Pokomo and Orma tribes, before Lamu Town finally went to sleep to be ready for another day of festivities. 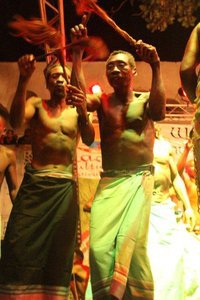 The LCT team was up early the following morning in preparation for a presentation in Lamu Fort. Robert Carr-Hartley was invited as a guest speaker during this presentation, which was entitled ‘The importance and uniqueness of the ecology of Lamu County and how its degradation will compound poverty’. This 30-minute presentation, which was fully attended, broached upon the environmental diversity of the Lamu eco-region and the ancient forests of the county, emphasising on the importance in recognising its significance in sustaining a healthy and balanced ecosystem for wildlife and mankind.
This presentation brought many unknown aspects of Lamu’s natural heritage to the attention of both the local elders, communities and international governments and representatives, highlighting the need to safeguard wildlife, marine and culture – the three pillars of the Lamu Conservation Trust. 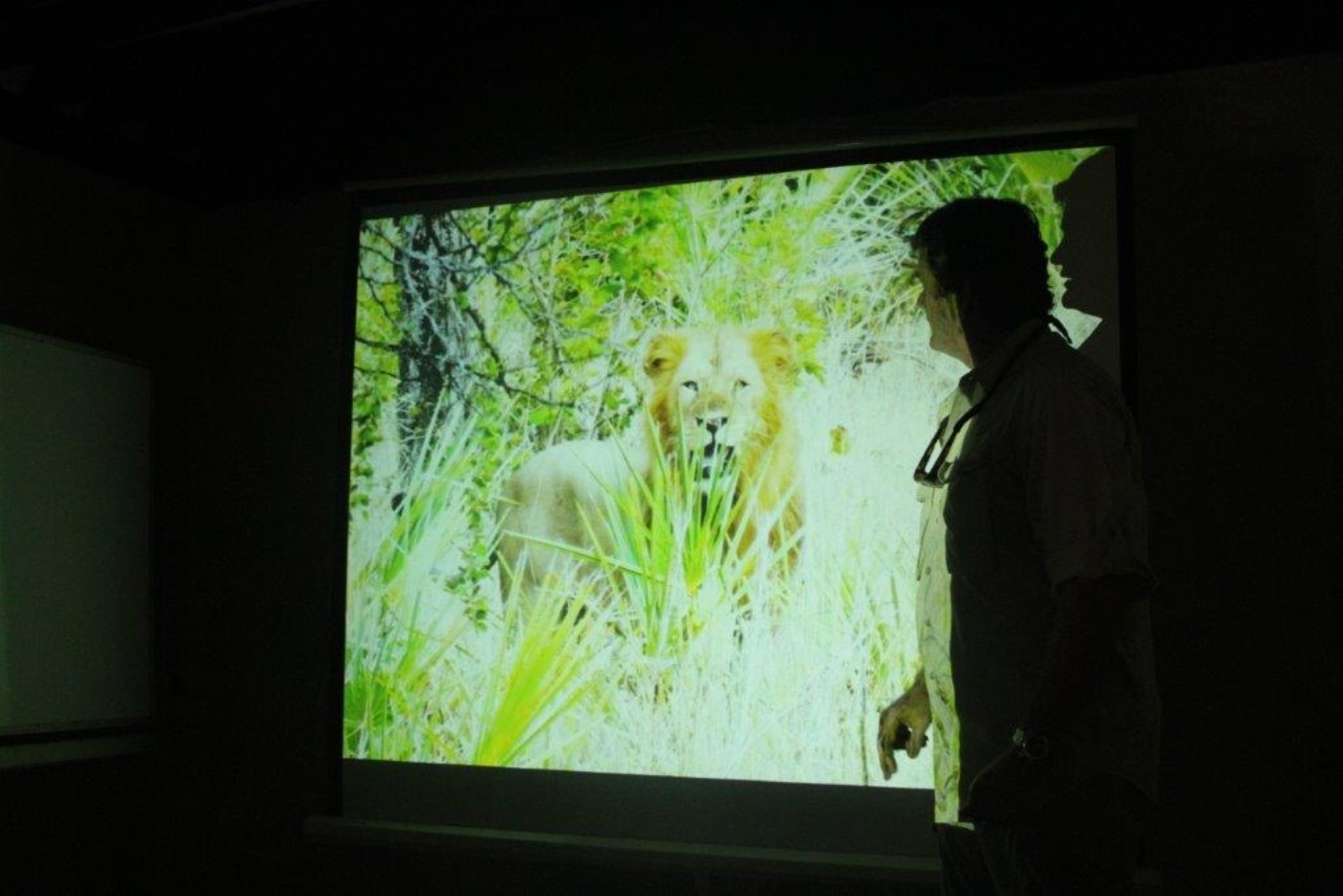 After the presentation everyone was out on the streets of Lamu once again to watch the famous donkey race. This frantic race is one of the most popular events during the festival attracting hundreds of spectators, who get a glimpse of young men riding their gallant donkey steeds from Lamu Museum along the seafront. This event was then followed closely by a canoe and swimming race before everyone lined the seafront ready to watch the Mashua Dhow Race. 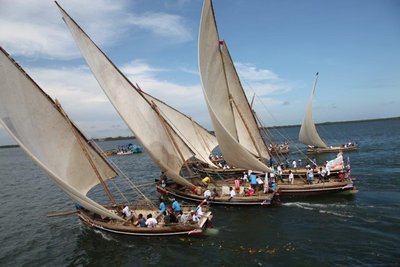 The Mashua race saw the most amount of dhows competing during this 2hour competition commencing from the shores of Shela town along the channel before turning and following a set route having to tack around several buoys before reaching the finish line. The LCT supported three dhows during this race sponsoring three sails – LCT, Marine and Culture. All three of the LCT’s dhows got off to a good start, jostling for a front position against the many other teams, before Marine took the lead followed closely by Culture. The Lamu House dhow soon sailed passed the leaders catching good wind leaving the others behind but with another change in the wind pattern another team took the lead leaving Marine in third place. As the finish line got closer Marine and Culture pulled some great tacks overtaking Lamu House and putting themselves in second and third place, but the leading team were then too far out of reach to try and overtake, so the teams had to settle for 2nd and 3rd place, which was a brilliant result. 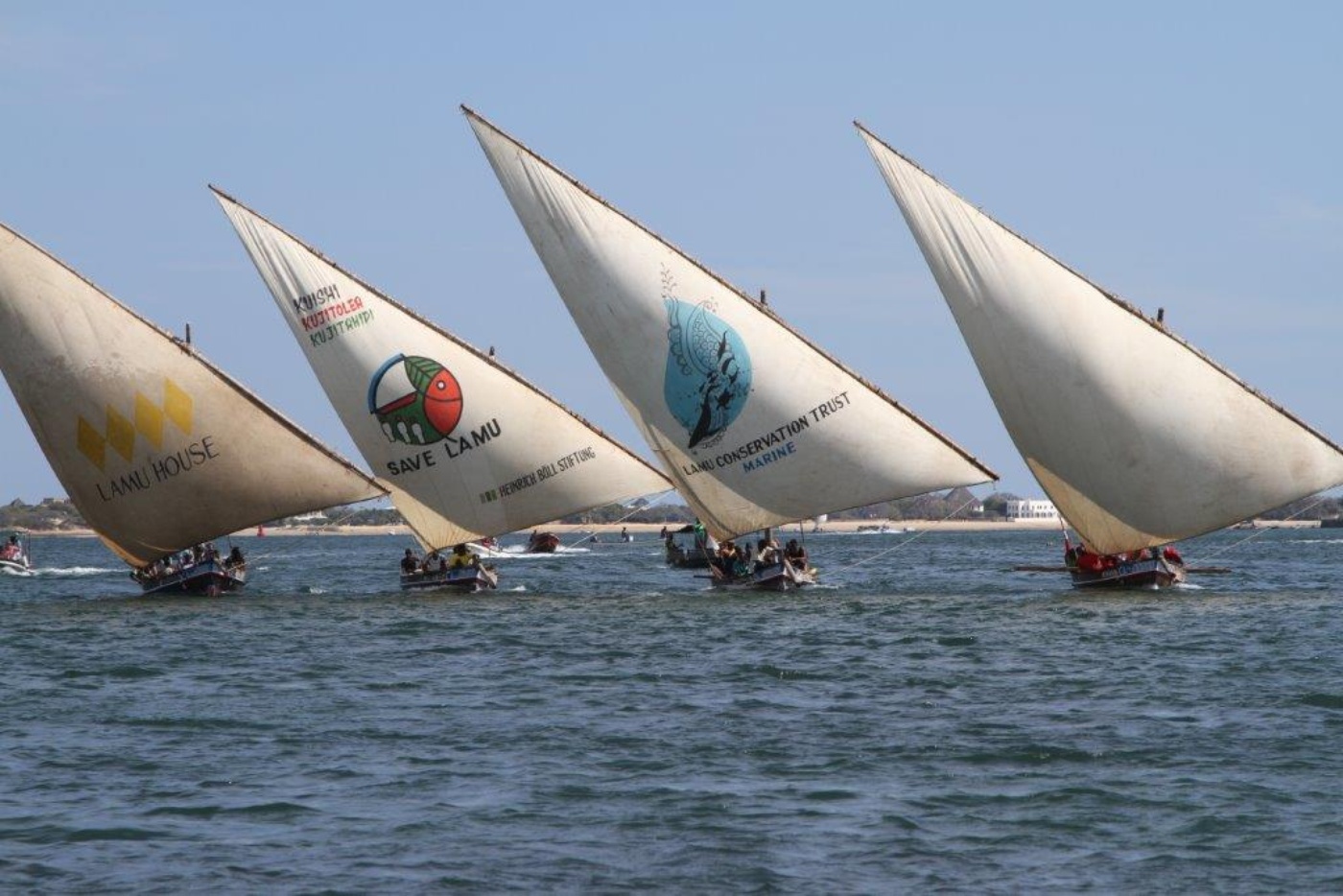 The whole Festival was a wonderful success for all who attended and the Lamu Conservation Trust was thrilled to be a part of it all, and is hopeful to help to make it just as successful next year.